Search here and hit enter....
Home  ›  Want
Home Want 'Wear the mask, but I don’t want it to be a mandate' - Manistee News Advocate

'Wear the mask, but I don’t want it to be a mandate' - Manistee News Advocate 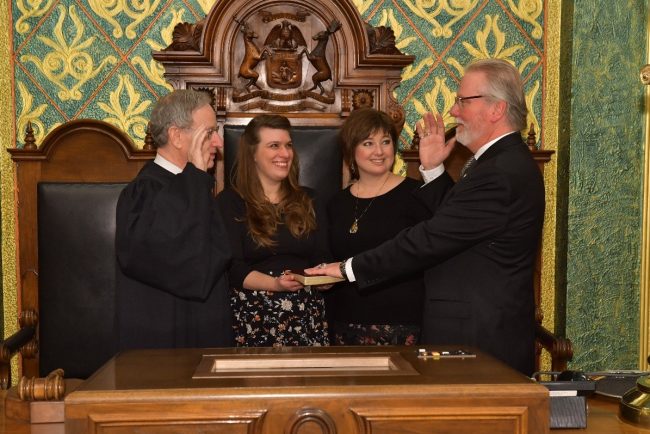 EDITOR'S NOTE: This is the second in a two part series of conversations with state Rep. Jack O'Malley. In the previous article, we discussed local developments, rural broadband and health care reform bills.

The News Advocate asked O’Malley six questions on topics ranging from the COVID-19 recovery, rural healthcare and broadband access, to developments in Manistee and Lansing. Some questions were edited for clarity, and some answers were adjusted for length.

MANISTEE NEWS ADVOCATE: When last we spoke, I asked what the potential post-COVID-19 recovery would look like. Now a year later, vaccines are being distributed and COVID-19 infection rates are at some of their highest levels since the pandemic began. What sort of steps are needed to navigate the coming months?

O’MALLEY: That’s a deep question, because … I don’t want this to sound political. I want to try and explain what I'm going to tell you.

I think if things would have been handled differently, at the beginning of this — we'd have a little different situation. We didn't have balance.

We needed to get buy-in as opposed to push in, and when you start telling people what to do it gets their hackles up. ... Wear the mask, but I don’t want it to be a mandate.

So where we're at right now, I think, is we were seeing a spike partly because we were so locked down.

And this is why I say herd immunity is not a dirty word. When people talk about herd immunity, I don’t think anybody was saying “take your kid over here and hold them next to somebody who’s got COVID, so they can get herd immunity.”

The discussion was, once we’re all vaccinated, some of us get it. It’s like any virus, right? At some point, we’re used to it, there’s a vaccine, we can beat it.

So I think we’re seeing the spike in numbers, because younger people are getting it. Maybe we did hide out a little too long. I don’t know. It is a virus. It is a pandemic. I don’t think anybody has argued the fact that it's a pandemic — so this isn’t just your average flu bug.

Where do we move forward? Personal responsibility — we all have to realize that we’ve got to be careful.

Some people are not going to wear a mask, accept that fact, you might not like it, but accept it. They’re in the minority, not the majority.

Our businesses, they were thrown into an enforcement roll six, eight months ago and it’s hurting them. I still hear stories of people who are ratting out businesses because somebody wasn’t wearing a mask properly.

So how we move forward, I pray to God that we can get along and we understand that we’re not all going to agree on things. But we have to be respectful of each other. And I think that that's been lost. And I think that's unfortunate.

MNA: You’ve suggested the state’s auditor general look into confidential severance agreements made between Gov. Gretchen Whitmer and members of her administration, Robert Gordon and Steve Gray. What sort of things are you expecting them to uncover and why is this important for residents of your district?

O’MALLEY: Well, the reason I went through the auditor general was because I’m a reasonable guy. Now my opponents would say I’m just a Republican hack; I hate the governor and all I want to do is trash her. I know that because I read the comments.

So what is the auditor general?

So I went to the auditor general and said, “Hey, can you look at payments over ($50,000) by the administration?”

That was a bit of a risky move. What if they come back and say, … “they've been doing this for 50 years?” Whitmer’s off the hook.

But what if we found out that, there’s been severance packages, but what if the non-disclosure clause and the severance money, that’s never happened before?

So they are like Switzerland, looking at the cause, and I think that everybody’s been bickering and whatnot — nobody brought the auditor general into it. I thought it was a fair way to say “all right, one side says this, the other side says that — let’s ask Switzerland what they think."

I sent that letter off to them, like 10 days ago. So their investigations take time. They don't just work through. I'm hoping to hear something back in a month. At least an update as to where they're at.

If somebody doesn't think that this (pandemic) is a controversial topic, they've been living under a bridge. The governor, in my opinion, has abused state law and power, and using the Department of Health and Human Services.

I was on the COVID Oversight Committee and we met all summer and the good Dr. Gordon was in multiple times. And let me tell you, he’s a jerk and I don’t like him. He acts very superior in his answers. And so now here is a situation where your very controversial department head leaves.

Our oversight committee is now looking at in there's a bill I think we're gonna be taking it up next week when we come back to ask for subpoena power to get former director Gordon and former director Gray in to say, what the heck are you supposed to be talking about? So, we get transparency.

MNA: Many Republicans have expressed skepticism over the results of the 2020 election despite the lack of any dispositive proof of widespread fraud. Do you share their concerns?

Now, I’ve been accused by some, not many, that I’m a treasonist, I’m a seditionist. Why? Because I asked the Supreme Court of the United States of America a constitutional question.

Now you got to remember ... we're coming off four years of Russian collusion. Four years, the president was a dirt bag with the Russians and tried to throw the government that had the election.

So for four years, the president’s supporters see people trying to kick him out of office. So the common thought is it's carrying into this election. Whether you agree with it or not, understand where that group that's upset is.

They have reasonable doubt, it's plausible that something's going on here, because they saw Russian collusion. So that's their situation.

Now, we also have no excuse absentee ballot. Our secretary of state sends out millions of applications to people who haven't even solicited, that's the first time that's ever happened. Usually, it's the local clerk, who sends out the ballot, and so on and so forth.

And so there are a lot of questions. Wait, was there fraud? Well there wasn’t fraud, but there were issues that we need to look at.

For example, a couple of weeks ago, we passed out of the House. I think it's eight bills that did several things ... one of which said that we have to remove 177,000 people from the voter rolls.

Point is, the other side is (saying) “voter suppression, you’re doing terrible things.”

Well, the thing they didn't pay attention to was … these were from an auditor general's report on the state of Michigan's election situation in the fall of 2019; way before the presidential election, and we're finally getting around to enacting those things, pulling those numbers of our voters off the rolls.

Here's what the law says: You send those people who haven't voted in 20 years, you sent him a letter. And if you don't hear from them, you have to wait two general election cycles. That's a total of eight years before you can remove their name from the ballot. How do they stop that process? Vote once.

It wasn't the best election. Because we're doing something we've never done before. We've got to figure out we were using technology that the laws aren't there for, we've got to update those.

... It's a complicated issue. (What) we're trying to do here is common sense election reform, which if you remember, in 2016, when Trump beat Hillary, there were a lot of people who said that election was stolen, and guys on my side were like, "No, it wasn't." Well, why didn't we necessarily investigate back then we should have? So these are things that we do need to correct, and unfortunately people throw out voter suppression and this, that, and the other thing just too darn easily.

Email any questions, along with your name and current hometown to scott.fraley@pioneergroup.com so that they may be included in a future discussion.