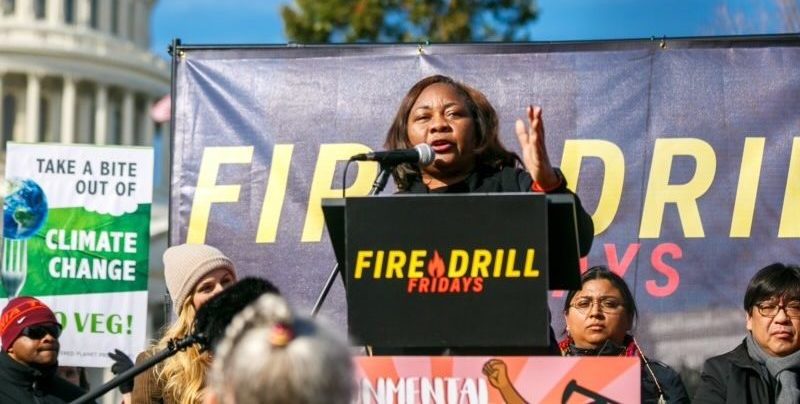 If you want an example of how infrastructure failures directly affect the lives of people in this country, you don’t have to look far.

The residents of Flint, Michigan, went years without safe drinking water after theirs was contaminated with lead leached from aging pipes. This year, a catastrophic winter storm temporarily left millions of people in Texas without access to electricity or clean water. That same storm led to the collapse of the local water infrastructure in Jackson, Mississippi, where residents were forced to boil the water that came out of their taps for over a month.

It’s clear that public health disasters occur — especially in America’s most marginalized communities — when infrastructure is left to age without much-needed updates that account for circumstances like climate change and population shifts.

Some infrastructure concerns go far less discussed than others including, notably, the issue of wastewater and sanitation. According to the American Society of Civil Engineers, the country’s wastewater treatment plants are functioning at an average of “81 percent of their design capacities,” and 15 percent have “reached or exceeded” that capacity. Drinking water service disruptions and flooding from sewer backups and other infrastructure failures cost U.S. households $2 billion in 2019. The ASCE predicts that figure will balloon to $14 billion in the next two decades.

But a significant percentage of American households — about 20 percent — are not connected to public plants, and instead use septic tanks or other wastewater systems that are directly connected to their homes. For communities in which any of those systems fail, the public health and socioeconomic consequences of uncontrolled sewage can be devastating.

It’s a pervasive issue that environmental justice activist and author Catherine Coleman Flowers, who was named a 2020 MacArthur fellow, knows well. She has dedicated much of her life’s work — which she documents in her 2020 book, “Waste: One Woman’s Fight Against America’s Dirty Secret” — to drawing attention to the systemic inequalities that deny so many poor, rural and marginalized communities in the U.S. access to functioning water infrastructure.

A turning point in Coleman Flowers’ career came when she returned to her home community in Lowndes County, Alabama, to work as the economic development coordinator. That position involved working to incentivize businesses to both provide services that were not available in the county at the time and to bring in new jobs.

“What I found out during that process is that without infrastructure, businesses can’t come. If the county or the town doesn’t have the money to build… the basic infrastructure like [water and sanitation], that’s an issue,” Coleman Flowers said.

The water-logged soils of Lowndes County are not able to support sanitation systems that have been prescribed by the state. Compounding factors like a water table that continues to rise as a result of climate change, she added, have intensified the problem to the point that many residents of the County — more than 70 percent of whom are Black — are left with a persistent sanitation problem that jeopardizes both their access to economic opportunity and their health. A 2017 study published in the American Journal of Tropical Medicine and Hygiene, for which Coleman Flowers collaborated with researchers, found that about a third of the 55 Lowndes County residents involved tested positive for hookworm, a gastrointestinal parasite that thrives where wastewater goes untreated.

When their wastewater systems fail, Coleman Flowers said, sewage backs up into these residents’ homes, or spills out onto the ground outside.

“This is not just a southern problem. It’s a rural problem, and it’s an American problem.”

Coleman Flowers doesn’t advocate for a top-down approach to these issues, but instead for one that centers community members first and foremost.

She is the founder of the nonprofit Center for Rural Enterprise and Environmental Justice (CREEJ), which collaborates with grassroots organizers across the country to document wastewater issues in their communities and partnering them with scientists who can help “validate what they’re seeing on the ground.” Coleman Flowers said the group has been contacted by residents in from California’s Central Valley, southern Illinois, Alaska and the Navajo Nation, among others.

“This is not just a Southern problem,” said Coleman Flowers. “It’s a rural problem, and it’s an American problem.”

CREEJ also aims to help elected officials work with people from the affected communities to design just policies that work for under-funded, unincorporated parts of the country.

In addition to drawing visibility to the domino effect that lack of water infrastructure has in America’s rural communities, Coleman Flowers advocates for technological solutions — like novel functional, affordable and reliable wastewater treatment systems — that all people can access.

“We have infrastructure that has been designed, a built environment that does not take into account the natural ecosystem,” she said. “And the ecosystem is winning.”

Coleman Flowers spoke to the PBS NewsHour about the work she’s doing now, the importance of upholding a “rural lexicon” when people outside of those communities address issues that impact them and her vision for a future that centers and solves water infrastructure issues.

This interview has been condensed and edited for clarity.

Why do you think sanitation gets less attention compared to other water justice issues?

People don’t want to talk about wastewater, especially when talking about what comes out of the human body.

I’ve had people come to me and say they’ve lived in affluent communities and when they have sunny day flooding, when they look into it, they see feces, human feces. But they don’t want to talk about it publicly because they’re afraid that it’s going to damage their property value.

What makes [marginalized] communities even more vulnerable is because a lot of them don’t have access to anything. There’s an intersectionality of poverty, there’s an intersectionality of racism. When you have those intertwined, then the health care disparities are factored in, too. So in the case of the wastewater problem, if you leave poor people to their own devices to solve this, first of all, they don’t have the money. And second, those that can afford it may put the systems in place and they fail — [the sewage is] coming back into their homes.

Can you give an example of the economic burdens that can result from inadequate wastewater systems?

We tried to help a family get a septic system recently and, as a case study, paid for the engineering that was done on the property. When they dug to do the perc test, which is necessary to determine what type of septic system or wastewater treatment system should go on that property, they struck water at 25 inches underground. That meant a different, more expensive system needed to go there that was going to cost $28,000 for a poor family that had an income of less than a thousand dollars a month.

What are some of the commonalities you’ve seen across communities you’ve visited and worked with that are fighting for water infrastructure?

What we’re finding is that those that don’t have infrastructure at all are primarily communities of color. But I’ve also seen in Appalachia and other rural areas where people are white and are poor, they’re having similar issues. There are failures around the country… no matter whether it’s melting permafrost or sandy soils or clays, like we have in Lowndes County.

There’s certain things about the urban lens that gives people a blind spot when they come to rural communities and they try to judge it based on that.

Part of the problem is that we have designed systems that are designed to fail, and they’re not designed to last. I believe we can do better than that. We’re working on helping people to see, through the lens of environmental justice, that these issues are impacting families in ways that we don’t understand in terms of their overall health.

You’ve talked about encouraging policymakers and leaders to embrace a “rural lexicon.” What does that mean?

I’ve defined the rural lexicon as a way of understanding rural communities. There’s certain things about the urban lens that gives people a blind spot when they come to rural communities and they try to judge it based on that. It’s organized very differently.

That’s what I want people to understand when they write policy and say “towns.” You’re excluding areas like where I came from because I didn’t grow up in a town. So that’s what the rural lexicon does. It helps people to have a better understanding of rural communities so that they don’t try to judge with an urban lens and miss a whole lot of what we’re trying to accomplish.

A lot of the folks that do want to help, that are writing policy, have wanted to come and see for themselves so they can understand it with local communities leading this and teaching them.

And I think that’s the way we’re going to arrive at finding some fair ways to address it on the policy side. But on the technology side, the same thing has to happen. I get a lot of messages from people who are selling products to tell me their products would work. But if [people] buy the product and the product is put in their homes and it fails, then they come up with a reason to blame the people that bought it. But these people are still dealing with raw sewage coming back into their homes or in their yards. So we’ve got to have a more humane way of dealing with it, because these are life and death issues.

What is your vision for a just restructuring of water infrastructure?

What I envision is reshaping this all together. I envision something like what we have in outer space. When you go into outer space, you can treat wastewater [and turn it into drinking water]. And they don’t have soils at all, or access to the kind of water that we have here. Why can’t we take that type of technology and make sure that it’s in every home, that you can go to a Lowe’s or Home Depot and buy it?

We have what it takes to find answers, and it’s my responsibility as an activist to articulate this to those people that could collaborate with us to help us find the answers. And I think what’s different about this paradigm is that it was people from Lowndes County, people that had been marginalized, that have shed the light on this [issue] in such a way that we’re going to come up with solutions that are going to help everybody.